Today you dont see that many male reenactors with hairnets. They are mostly used by women. But while looking at 16th century inspiration in arts its quite clear that hairnet where very common also on men. 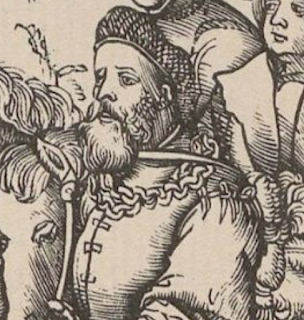 They look a bit different from womens hairnets. A bit smaller, a bit pointed, with a very distinct shape. Me and a friend of mine had a disscussion about the shape, that it might have some kind of padding to create that special shape. Or did all of them have a lot of hair in some kind of weird hairdo? I didnt think so, but I wasnt sure, so I needed to try to make one. The woodcut above is made by Hans Buegkmair 1514. 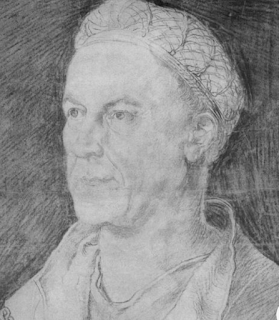 This is Jakob Fugger, painted by Albrecht Durer. Jakob semse to like hairnets, he is wearing them in a lot of paintings.
This is him too...also by Durer. 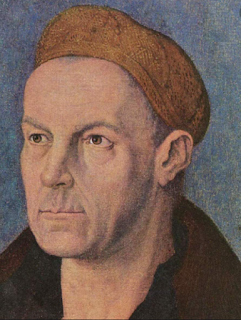 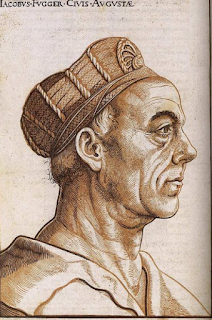 These types of nets has a very distinct shape. High at the front and at the back. And often a round shape in the front. Probably in the back too but its much more difficult to find a picture of this.
Here you see the round shape very clearly. 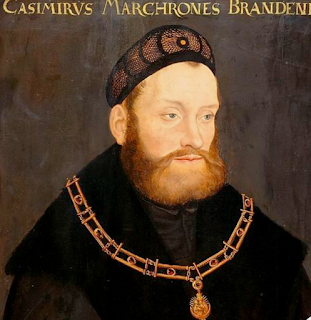 It might be possible to make this shape with macramé too but I dont work in that technique, so I thought of sprang of course. If you make a squared net in sprang and pull the sides together, this type of round eye apears. So I wanted to try to make one, to see if would get the right shape on its own or if I needed to work with the net somehow.
All of the men above might be wealty, at least Fugger was, very wealty. But the hairnets is also seen on men from other social classes.
Like this guy, a crossbowman made by Holbein. 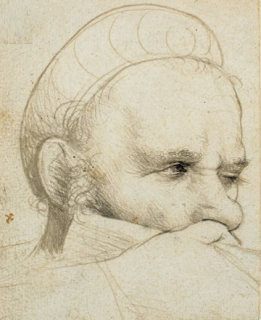 The same pointy shape with the eye in the front. The material might be linen in his net, and silk in Jakob Fuggers... The shape is the same but the cost of the material is the differens between the poor and the wealthy. But I have not yet seen a net on the head of a farmer. There are paintings of executioners with hairnets though. I have not tried making a silk net yet, but I have som at home, so, soon.

And here is the result. I made a sprang hairnet in black linen. It has a wool binding all away around, in green wool. To make it stay on there is a fingerloop braid to knot it tight. 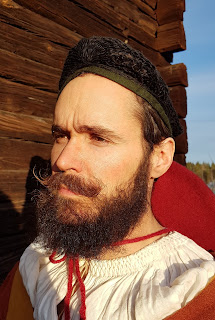 It has no padding. The shape appears from the shape of the net, when pulling the sides together tightly, creating the round eye in the front. The string needs to lay on top of the binding, and not on the net, to not press it down and take away the shape.
The warp was 40 cm long and made out of 56 loops. 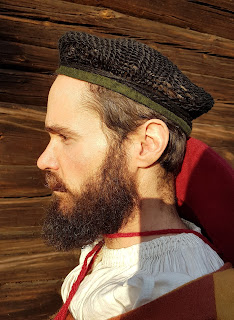 Here we can see that the front and the back has the same pointy shape. This net is a bit smaller than the female versions I have made before, where I want a wulst to fit underneath. This kind of male net seems to sit more on the top of the head than on the head. 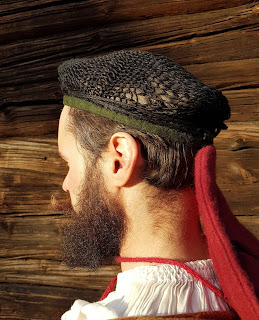 And with a hat! 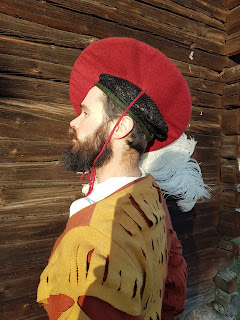 I think it looks sooo 16th century Germany! Im really happy with it. Next time I might make the warp bigger but tighter, to see if the shape can be even more distinct.
I think more men should wear hairnets!
Upplagd av Marlein - a 16th century wardrobe kl. 23:18