More sprang...I know, I cant help it! Its fun.
This time, garters. I made pairs both of wool and of silk. And I will show you pictures. But first, some more information. According to Dagmar Dinkler, Die Rekonstruktion von eng anliegenden, antiken Bekleidungsstücken, sprang is actually a Swedish word, meaning "open work". I didnt know that, even dough Im Swedish.
To the good news! There actually is a pair of extant garters from the 16th century. They are Italian, not German, close enough. They are dated between 1575-1600 and are made with silk. 145,9 cm long and 6,5 cm broad.
And here they are! 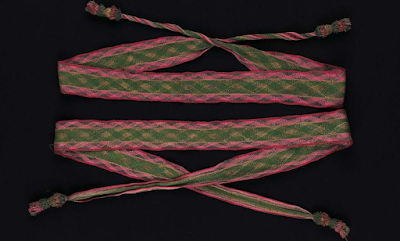 Pretty, right?!
They are a bit over my level yet, but Im working on it.
According to Maria Collin, Fataburen 48, there is information of sprang being spread all across Scandinavia during the late medieval ages. No garters in sprang from this time are found in Scandinavia. But I figure, it is a quite easy technique so if sprang as a technique is well know up here, they most have been making garters. In the same source there is information about a Karine Gyldenstjerne, born in Denmark 1542, at the age of seven made to live in a convent where she learn how to do sprang. It is also said that the word sprang is coming from norther Germany, so much for being a Swedish word! But a lot of German and Swedish words are very alike.
And here is my try at a pair of silk garters! They are made of hand-dyed silk, tiny tiny threads. And they are so tightly woven, you wouldn't believe its actually sprang! 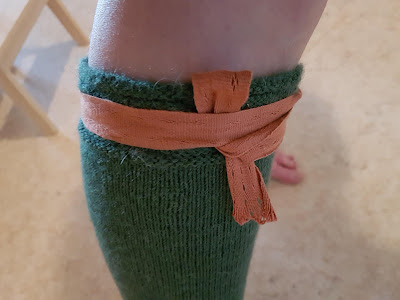 I have not worked in silk before so I played around with some holes and flower, just to try it out. The pattern are really hard to see, with such small threads and tight weave, but its there. The only socks I had, fancy enough for silk garters, are a bit to short for me, so the garters ended up underneath the knee. 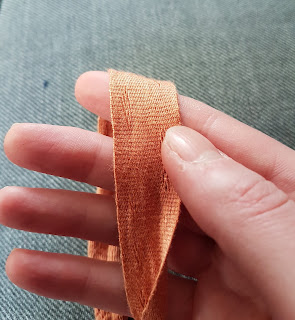 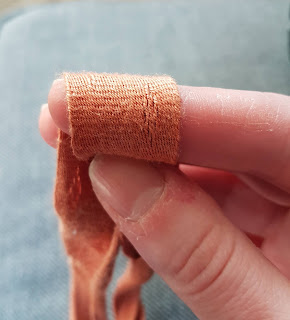 The texture of the silk made it possible to make the weave really tight, which was a fun experience. A big difference from the wool I have been working with, the wool thread stick to each other much more.
Next pair need to be much longer, compared to the extant 16th century ones. They are only 7 dm long. And I have no tassels, needs to make those. Everybody needs tassels on their garters, right?!
I also made wool garters, much simpler, suitable for common people I imagine. I used a dark red wool that I already had at home. They are without pattern and with just one colour. 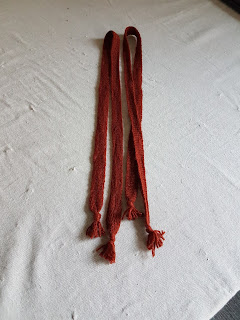 These types were used in Sweden up until the 19th century and had two or three colours and small tassels at the ends. Many of these kind are still existing in museums and being worn with the folk costumes. During the 19th century women often use garter much more simpler than the ones men used. In a book about 19th century clothing in Svärdsjö och Enviken in Sweden, Dräktbruk och Linnetradition, it is said that women used efsingar, warpthreads not being used in the end of a warp, as garters. It is also said in this book that the garters where made by "sprang, a technique used for making ribbons sense the middle ages". These ribbons are probably made on a board. The board have a nail in each end and the sprang is being worked between these nails.
I did not have a sprang-board while doing the wool ones. I used my frame and a circular warp. The frame is to short to make them in just one regular warp. It was not that complicated with a circular warp once I got the hang of it.
They are 89 cm long and 1,7 cm broad. But with tassels! 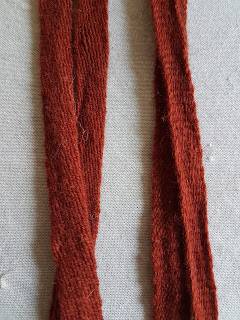 All the rows are visible as lines in the fabric. 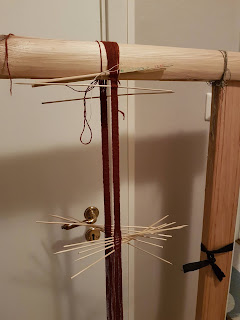 When making a warp this narrow and long the ribbon is starting to turn, its quite difficult when a warp full of sticks is turning... 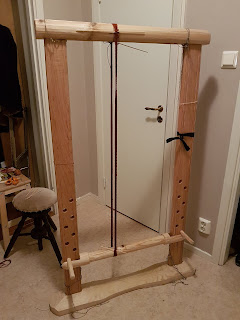 Here you see the whole warp. Circular, stretched around the frame. 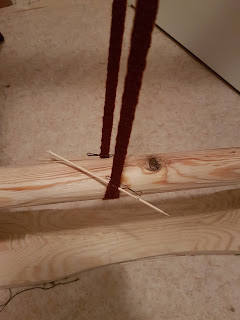 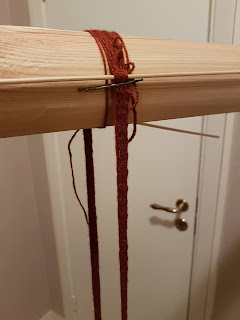 When the weave is done the warp is cut into two ribbons and the end secured with knots. The ribbons are soaked and laid out to dry over night.

I actually made my own sprang-board, after these where done...

Here you see the silk ones on the frame. Im trying to show the pattern. 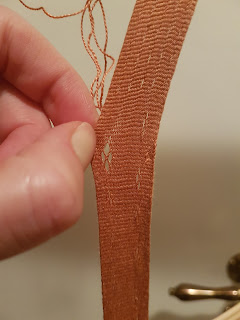