I just came home from Doublewars, one of the best events we have here in Nordmark, maybe its the best. Ten days of happiness and joy. It was both windy and rainy but it didnt matter when you had all your friends gathers again. Its has been two long years...

I lived in my own tent but shared camp with my lovely Household Oak and Acorn. We were almost never alone in our camp, we shared it whit friends visiting. Dear old friends and friends we came to know. 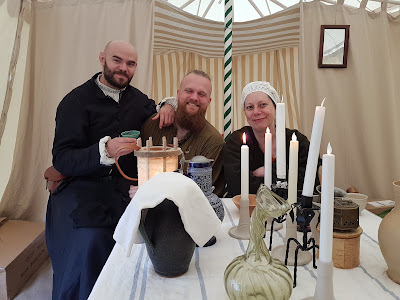 We had cocktail-hour every day, talking about interesting subjects. My sister Görvel and her daughter Sabine is so skilled when it comes to both food and drinks. 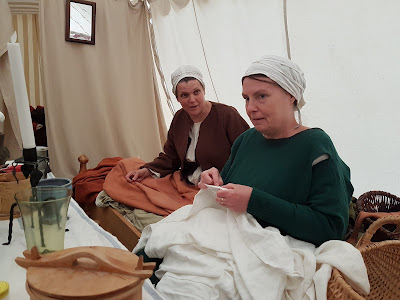 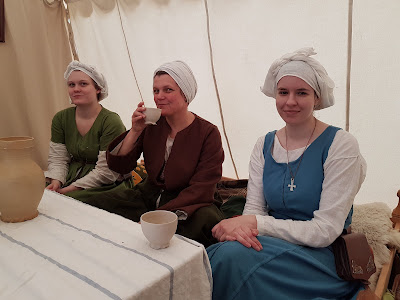 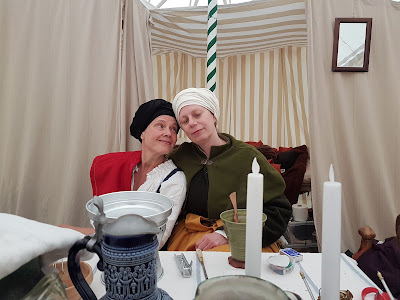 This year Doublewars had almost 400 people present. The camp was magical. All modern tents are placed somewhere else so that we can enjoy the medieval dream in camp. 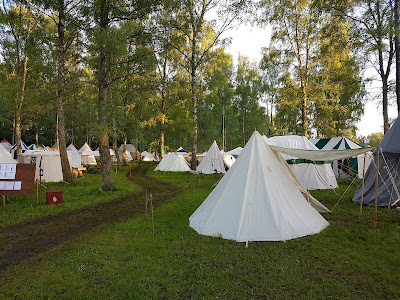 And finally I could share the joy of sprang with others. I held a class in how to make your own sprang hairnet. They all worked in silk, making female nets. Still not that many guys interested, its a shame ;) 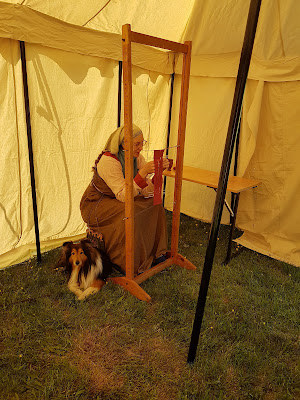 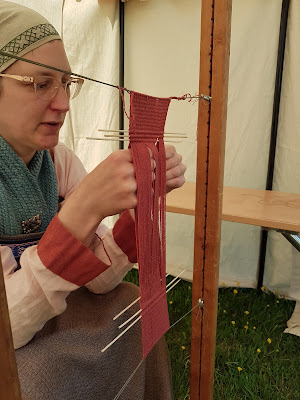 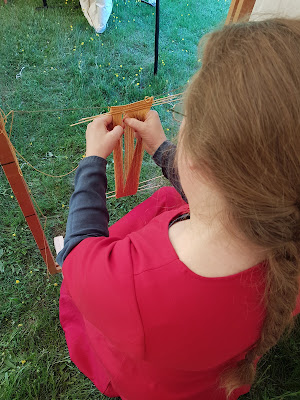 And here is Barbara in her finished net, pink silk with a black wool binding and a black silk braid. She did a good job and it looks so good on her. Im so happy seeing it on her. 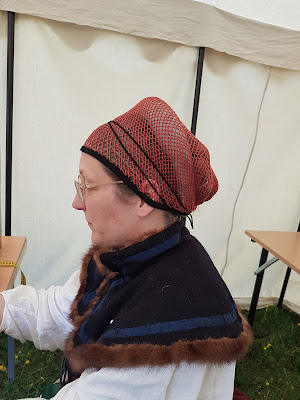 I also showed sprang at the Laurel Sponsored display. 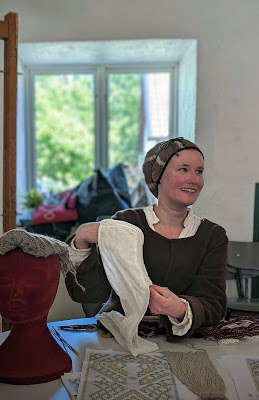 Here Im holding a version of the Lengberg cap with the sprang piece in the middle. The pattern for the sprang piece is on the table in front of me. Its created by Carol James and is possible to find online, in their article on the subject. On the mannequin lays a copy of the Borum Eshöj-net, from 1400 BC. Just laying around... I also had one of my frames set up so that people could try sprang. I dont have a picture of that, I wish I had! It was fun to be able to let people try for them self.
Balthasar, my brother in the sca,  showed his fantastic artwork at the display. He is such a talented artist and he makes medieval tarotcards. 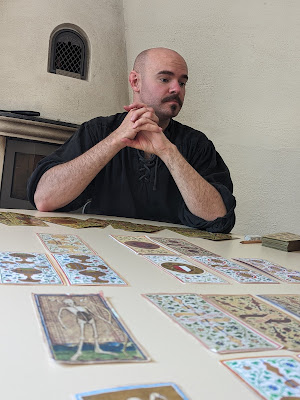 Görvel displayed her Gotlandic viking age clothing. She looked absolutely stunning in it for court. 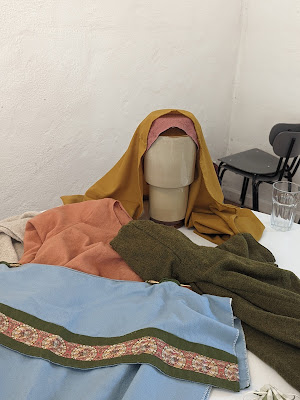 She made this dress that same day, with a little help from all of us, but very little. Handsewn, a dress, in one day... 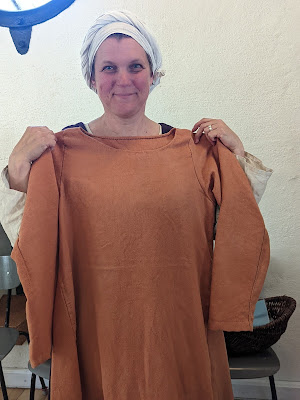 The Society of the Golden egg 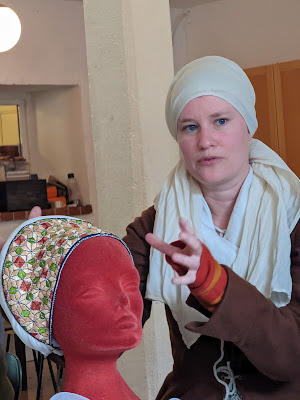 All the pictures from the meeting and from the display are taken by Libby, thanks for letting me borrow them!
I wanted to make something fun when it was time to show it of to the people. So for court I put it on but covered it with...my dishtowel...actually. It didnt look weird, promise. I went to court in it, was sworn in as a lady in waiting to the princess of Nordmark. With a dishtowel on my head...
Here is what I looked like, not that bad, right?! 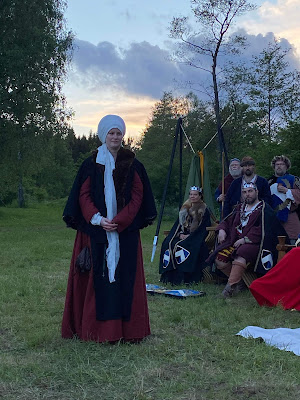 And my Laurel Renike Tucher helped me take the covering of... 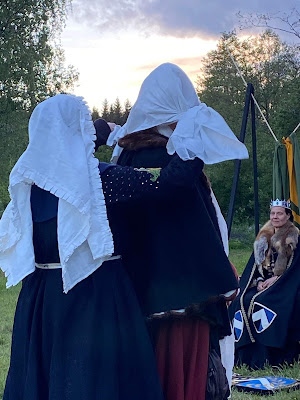 ...so that everybody could see. 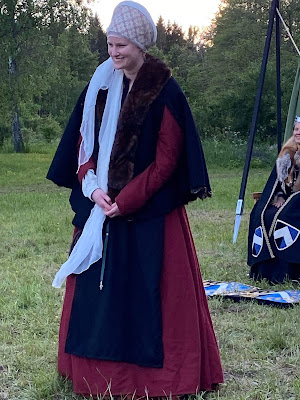 I was so happy. And proud. This haube is probably the most difficult garb I have ever done.
At the same court very dear friends of mine was sworned in as prince and princess of Nordmark. After the long reign during the plague they are back to rule over us again. 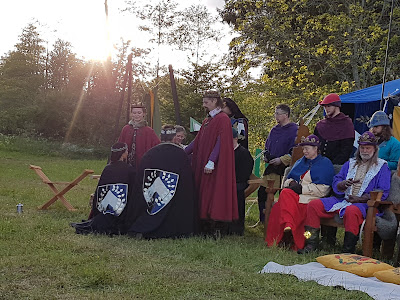 And yes, there was a market too! Almost forgot... 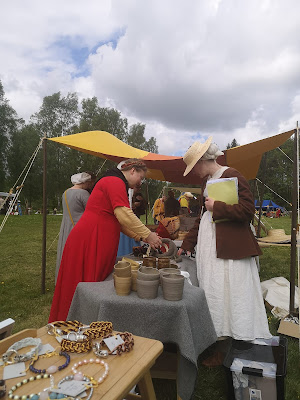 I sold my ceramics and my sprang, hairnets and Lengberg-sprang. In this picture you could also see the wounderful jewelery of Annoyed Kitten. Its her picture too.
Thanks everyone. I love you all and I cant wait to see you again!
Upplagd av Marlein - a 16th century wardrobe kl. 11:27