I have been working on a new dress, or a complete outfit actually. There is not enough with just a dress to create an outfit, it consists of a little bit more than that. The outfit that I have made is for a farmer, a woman of the Bauren class. The clothing is a big part of a person´s identity and during the 16th century regulated by law. So to be able to make an outfit that feels accurate I needed to start there, with the sumptuary law. What does it say for this social class?

The first thing that is stated is that they needed to wear clothing made out of fabrics from the German countries, nothing that was imported. Except for some finer wool for a gollar. But no silk! The only exception is their daughters, they could wear a thin silk hairband. And no embroidered collars.

The top layer, the gown, is called rock in German and I started working on it in january. It begun with the fabric. I was not content with it, it felted to fancy for the social class I wanted to portray. I bought my fabric at Medeltidsmode. Its this one. So I put all of it in the washing-machine with a little to hot water to make it contract a bit more. And it worked! But I most admit, I was nervous while it was in there. I chose pink. I wanted a colour that was cheap to make. My thought was that maybe they put this one in after they coloured red fabrics, just to use the last of the pigments in the bath. I dont know if that is how pink is made, but it felted possible. As a lining I used a piece of a used underskirt in linen that I made years ago.

As inspiration I used pinterest and the book Town and Country 1517-1550 by Marion McKnealy and Max Geisberg. The woodcut The big church festival by Sebald Beham from 1535 contains all the inspiration you might need for this type of clothing.

I mean, look at these lovely ladies! 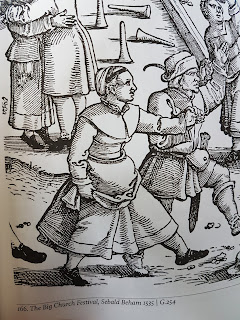 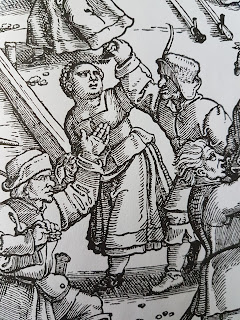 This one below is my favorite... 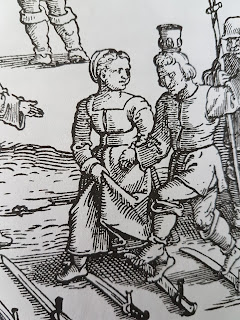 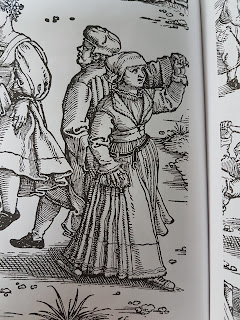 The things I noticed is that the skirts are rather short, the neckline not as low as I am used to when it comes to German 16th century and they have another type of headwear, not the typical steuchlein.

And this is my take on their clothing. 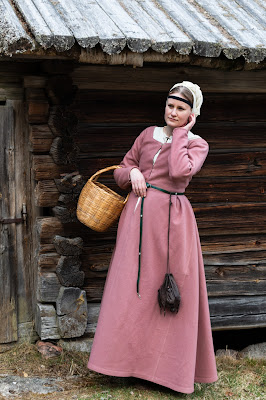 I thought I cut of the hem high enough, but I did not. I might cut of some more. But the dress is made with a padded hem, so I cant say I look forward to it...

When taking these photos I wanted everything in the pictures to be historical correct. So the building are too. The are taken at a folk museum and the buildings are both 15th century, old compare to the clothing I know, but I thought it was accurate. 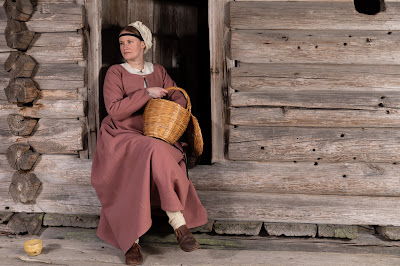 Even my basked is based on a 16th century one and my bowls too. They are from a English find, but good enough.

The dress is handsewn with undyed linen thread and wax. The seam allowance is folded and whip stitched. The dress closes with hocks and eyes, but only half way up. At the top there is two holes and a string. The string is a fingerloop braid made of undyed linen thread. 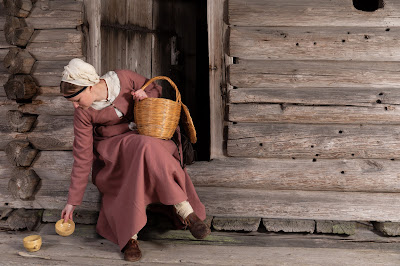 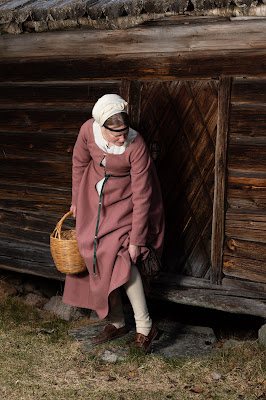 My shoes are handmade to, by Erik Frisk.
The hairdo is like nothing I have seen in other German 16th century artwork. Its like the young girls kept their silk hairband while marrying, and therefore covering up some of the rest. During the 16th century it started to be allowed to show a little bit more hair. According to sumptuary law young girls were allowed to have a silk ribbon as hairband. Maybe it stayed in this version? 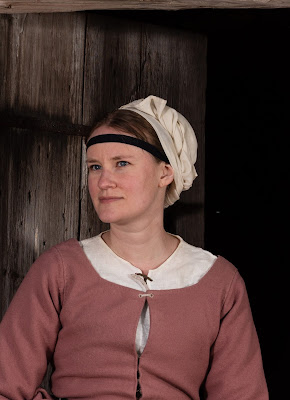 It was not easy to keep the back part to stay on my head...I used a wulsthaube that I folded back and kept in place with the ribbon and covered with a veil, a schleier. Not the easiest hairdo to wear when having bangs... 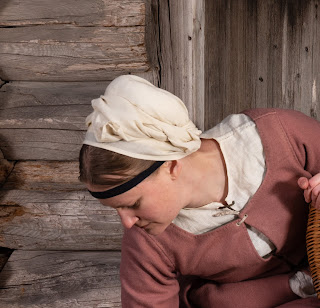 Here it is in a close up. Its from a woodcut of a dancing farmers-couple made by Durer. 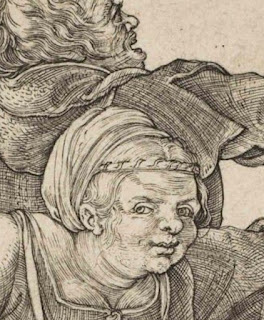 But while making this dress I thought, I cant wear this without proper undergarments. Everything else I had felted to fancy.
So, I made them too... 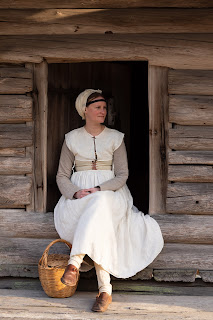 Here Im wearing a hemd in undyed linen, very much like the ones they would have wore in the previous century. On top of it I have the unterrock, the kirtle. Its made out of undyed wool, with visible lacing in the front. It is very deeply cut in the front so Im wearing a untergollar in linen, its also just very simply laced. If you wore a dress with a neckline that was too low you could actually get fined. So, untergollar! The inspiration for both the unterrock and the untergollar is from this woodcut - The domestic quarrel made by Sebald Beham 1535. On top of the unterrock Im wearing a apron, a schurz. In everyday life an apron covering the whole skirt, a washable layer over a usually not washable dress, most have been effective and helpful. This type where used of both peasant and patrician women. I have written about that apron before, you can read about it here. I thought this outfit would be perfect for working the fields on warm summer days. But with a straw hat of course, I need to get one of those. 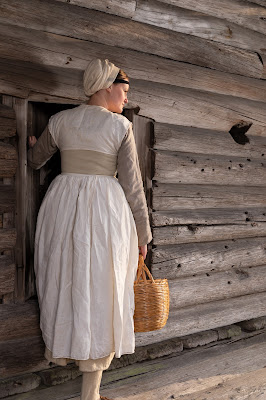 I also wear a pair of handsewn stockings in undyed wool and garters, made with the sprang technique in red wool. 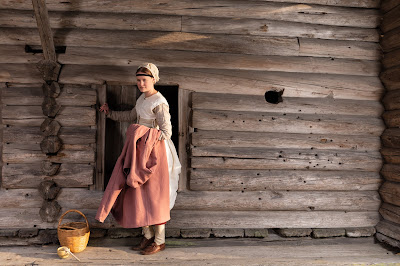 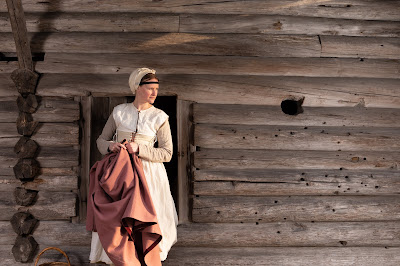 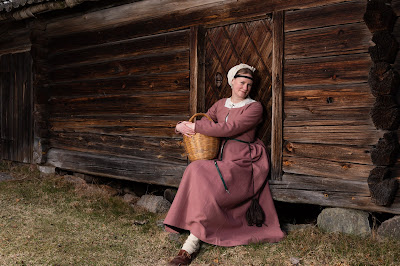 The photos are taken by Anders Ragnarsson. Thank you.