I have not been writing in a while. I have been working on something for myself, something that took a little bit of time. Right before covid I finished an embroidered haube, the most complicated embroidery I have ever made, as a Golden egg-project. The society of the golden egg is a challenge household for the arts and sciences in the Kingdom of Drachenwald, within the Society for Creative Anachronism. The aim of the Society of the Golden Egg is to encourage artisans to increase their knowledge and skills through continuous challenges of at least intermediate difficulty, but which are a personal challenge to the person seeking to join the society.

It was a narrow social class that could purchase and wear this exclusive commodity. Silk or gold-embroidered dresses were generally forbidden to non-noble persons, silk-, gold- and pearlwork were restricted to the upper-classes. According to Lisa Monnas, in the book Merchants, Princes, and Painters, not only the fabric and the lavish use of gold and silver thread, but also the complicated embroideries, were an indication of status. The fabric and thread could be expensive, and so was the workmanship. As an example – the embroiderers work for making the embroidery on a set of garments for Edward VI´s coronation in England cost almost half of what the painter Holbein got as a annual salary.

And up to this point I didnt have a dress that was fancy enough for the haube that I made. So I could not, according to the laws of the time, wear it if I wanted to make a impression that was somewhat historically accurate. I needed to make a new dress..

And now I have! 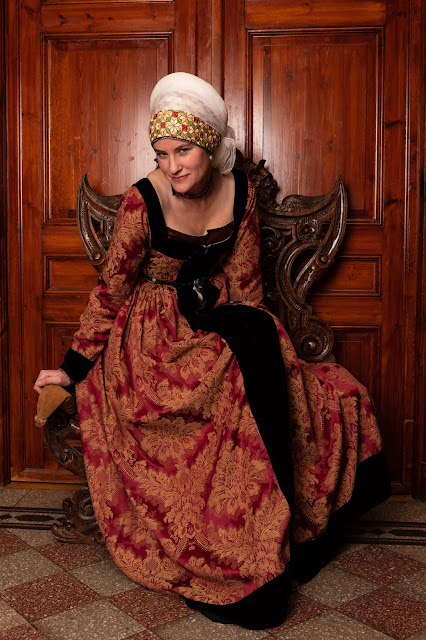 It was done by october 2022 and I was wearing it for Drachenwalds university so some of you have seen it. But I didnt have the chance to take proper pictures of it, and I really like to do so every time I have made a new outfit.

"Rock" was the common name for a womens dress, with attached bodice and skirt, during the 16th century in Germany. The word ärmelrock is simply translated to dress with sleeves, a gown. Wool was the most common material in overdresses for all classes of society but the upper classes could use finer materials. The ordinance from 1536 permitted the upper classes to wear velvet, satin or other silks without any colour restrictions. The trimmings on womens skirts was also a status attribute. 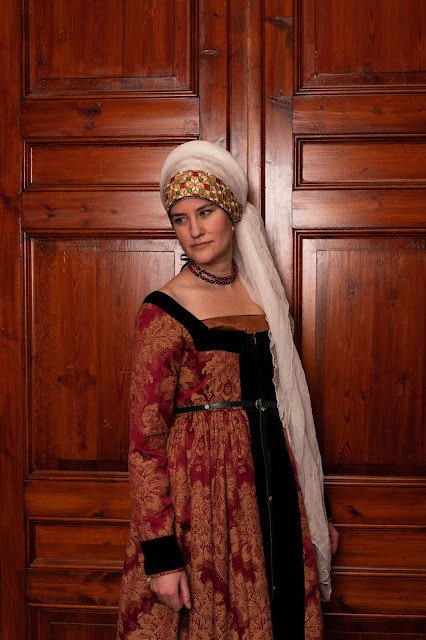 My dress is made of a polyester brocade and cotton velvet. It is all made by hand, every stitch in it. I used waxed undyed linen thread, backstitches and whip stitches. The pattern for the skirt consist of two squared pieces of fabric. I dont normally do that with my skirts, I want them to be more narrow at the waist and fuller at the skirt, but with the pattern on this fabric, no way, squared pieces it was. And I only had four meters of it and that made me a bit nervous, I could not buy more if I messed up. I actually bought this fabric ten years ago, or more. Some of you might recognized it... I used it as background when I first photographed the haube, two years ago. 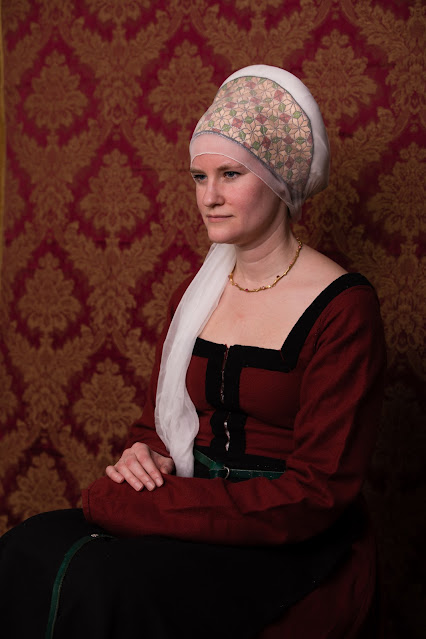 And now its made into a dress, much better use, dont you think! And the look is over all more complete with a fancier dress. This is how a cap of this kind should be matched.

I was thinking I might put some more velvet, thin stripes of it, on the sleeves. Or make cuffs. I think that would be nice. What do you think? The sleeves are a tiny bit too short in my opinion.  Or maybe its just good the way it is... 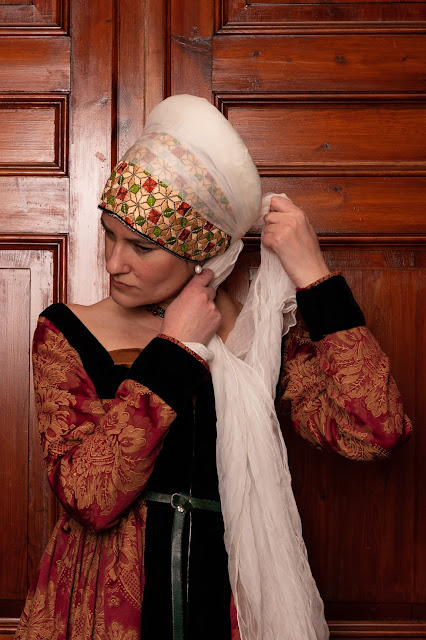 Im wearing the haube and schleier a bit different here too, with the embroideries showing. Its not really the right way, but I thought it looked good. The colours of the embroidery looks so much better without the schleier on top of it. The thin veil were used on top of embroideries in 16th century Germany to protect the valuable materials. Its very uncommon too see embroidered headwear in artwork without this protective layer. I can´t recall any without right now actually... 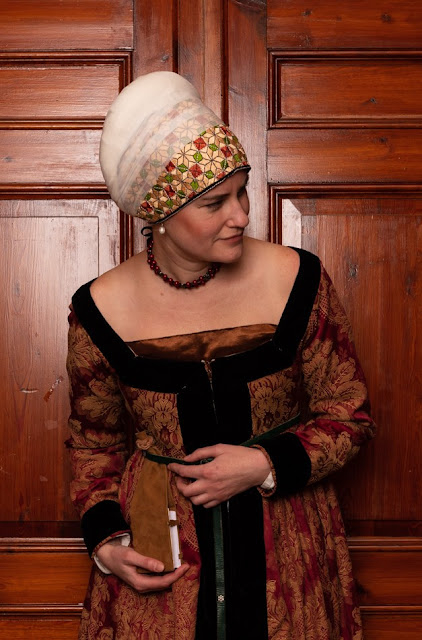 Last summer I met a talented bookmaker that made me my own girdlebook. Its a copy of a 16th century German girdlebook and I really like it. Girdlebooks were small portable books worn by aristocratic nobles as a popular accessory between the 13th and 16th centuries. It was a visible statement of social position and wealth, it should that the bearer could read. I have not written anything in mine yet, even though the maker told me to use it. I will, I promise! Its hanging by the knot underneath my belt. 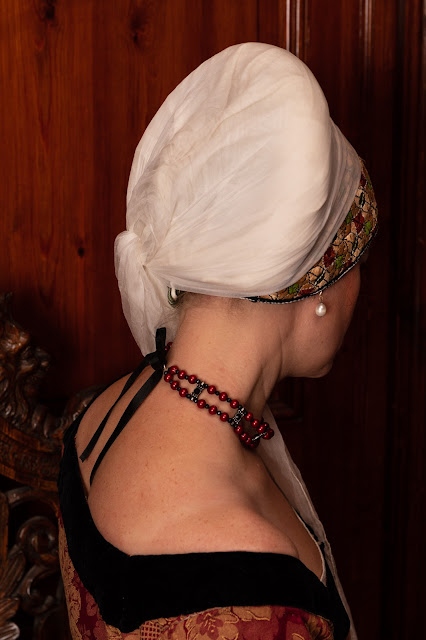 The necklace is made by the talented Agnes Edgren. I was lucky enough to trade it for some ceramics and it goes so well with the rest of this outfit. You find her at Annoyed.kitten on instagram. 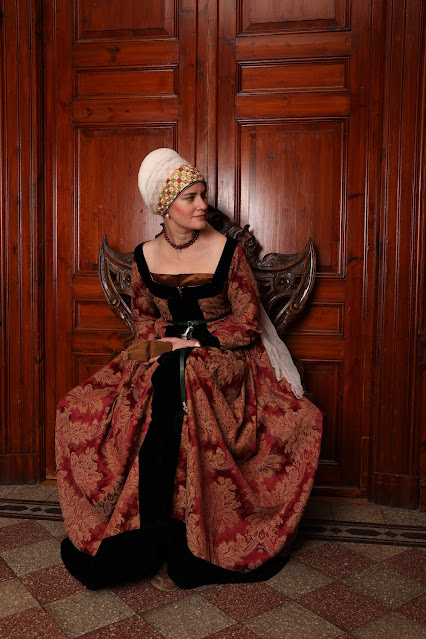 The brusttuch, the breastcloth, Im wearing is just a loose piece of cloth that Im using until I could make a more permanent one with embroideries. But I think it worked out well for being something temporary. When I posted the first pictures of the haube on facebook two years ago there were actually a guy telling me that I had to much cleavage. So, I did obviously listen, happy now?! Some people...

But according to the law he is actually right...I dont know if he knew that though... A decree from 1490, still valid during the 16th century, banned women from having lover necklines than two fingers wide from the base of the neck down. Most women solved this by wearing a gollar, kerchief or highnecked shirt underneath (or on top of) their dresses. The haube is from the painting Portrait of a woman by Bernhard Strigel and she is actually wearing a brusttuch, a bit higher up than I do here, and a kerchief over her shoulders together with a bigger necklace, to cover up her cleavage. Her shirt is a bit higher than mine too. Her kerchief has embroidered borders. That might be something I need to make for me too.

Here she is, isn't she beautiful? Her shirt is also embroidered at the neckline. And her brusttuch, and her kerchief. Together with that haube. Its no longer known who she was, but depending on what she is wearing its totally safe to say that she is nobility. The painting is from 1510. The colours of her haube is also a bit moderate, but it must be somewhat like mine, when taking of the schleier, shiny and beautiful and bright. 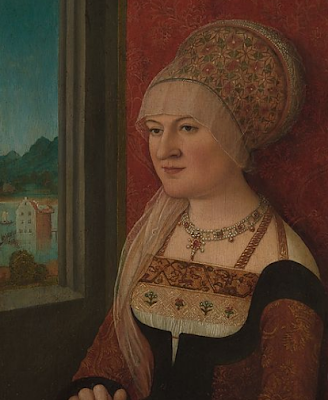 I like that my fabric is at least similar to hers. Her fabric could actually be both satin and velvet, hard to say. But velvet with these prints are impossible to come by, so satin it is. 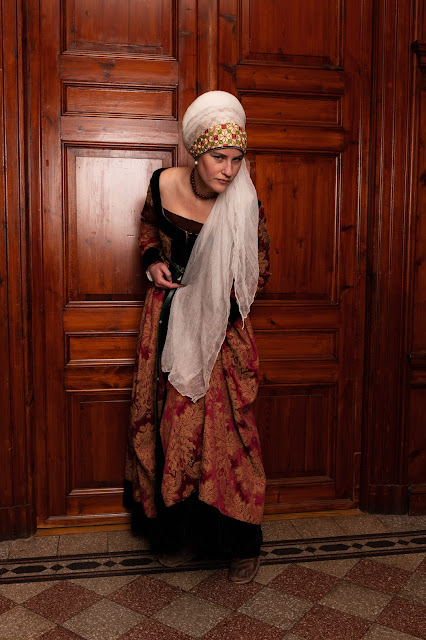 I might need fancier shoes...Im wearing peasant shoes! But I know just the right man for that too, my shoe-maker Erik Dalekarl. There are so many talented people in the SCA and Im fortunate enough to be able to call some of all these talented people my friends.

And finally, my photographer Anders. As always, thank you. All the photographs here are taken by Anders Ragnarsson. 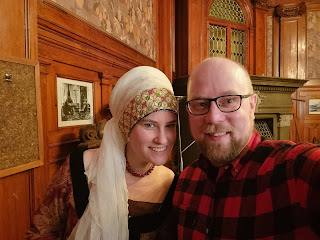 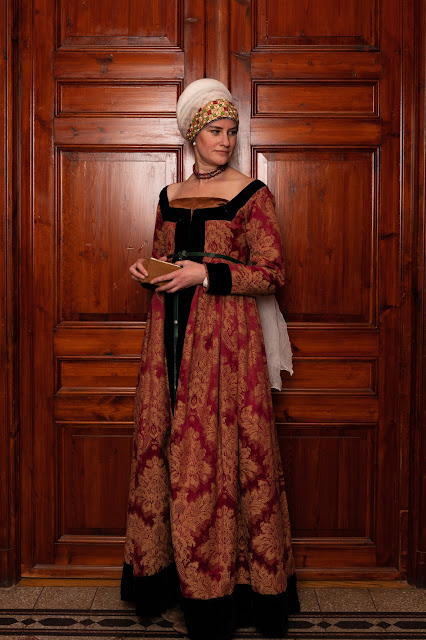