I got asked if I could make a wulsthaube, and that I could! I dont know the person that Im making the wulsthaube for and we do not live close to each other. Therefore I made the wulsthaube a bit different to what I normaly do, when I can try it out, on my self or the person Im making it for.
Wulst, wulsthaube and stucklein all appear separately in the inventories, so its likely they could be taken apart and maybe used togheter with other garments. Or for laundry. So this one might be a little bit different to what they actually did look like. In this case the wulst and the wulsthaube is sewn together. They are possible to take apart if you take away the stitches, but nothing you do in a hurry.
In the first years of the 16th century the wulsthaube is BIG. This one is quite neat, not especially big. But it is still round and therefore not to far into the century either.  The fashionable development of the headwear in the 16th century saw a reduction in size in the first decade of the 16th century, but kept its round shape on the back of the head. Later it also started to lean a bit backwards. This one might be around 1515-20?
I started with a framework of wire. According to Marion McNealy they had wire in Germany during the 16th century, so wire is not wrong to use. I havent researched that part myself. I made it not as a whole circle, but open at the bottom, to fit different headsizes. Because the framework is made out of wire it is possible to change the shape/angle of the wulst. To lean it a bit backwards if the wearer would like to get a younger shape to it. 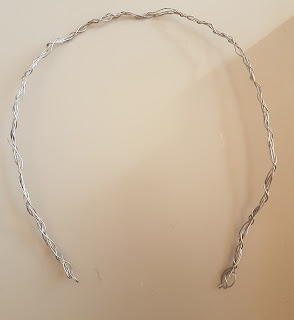 Next step was to add the padding. I used cotton, wraping it around my wire framwork. 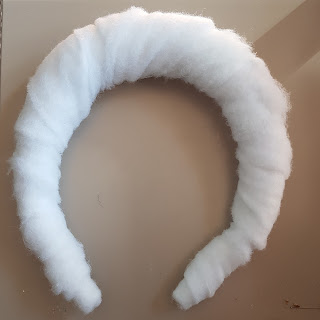 Cotton padding were often used for doublets, duvets or sleeping caps in Germany during the 16th century. (Sander-Zeidel, Textiler hausrat). There is one extant find of a padded roll or wulst from the 16th century. But a covering fabric used to preserv the object makes it inpossible to know what it is padded with (Nutz, Nets-Knots-Lace Early 16th Century headdresses from East Tyrol).
The cotton padding is then covered with linen fabric. 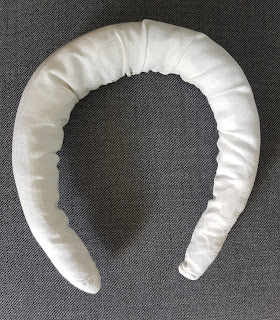 And the wulst is done!
Next step is to attach it to the "coif" haube. I started with a square piece of linen, 67 cm x 37 cm. The front hem of the coif is folded in and sewn down with a running stitch, with waxed linen thread.  The wulst is then inserted at an angle, creating a halfmoon-shape. I desided to cut away some of the spare fabric and tuck the rest in around the wulst at the inside. This might not be historicaly accurate either, to cut away some of the fabric. This makes it harder to take apart and wash, when the coif is not a hole squared piece of fabric with a worked hem. But you could, just dont use a washing machine.
In the picture below you can se where the stitches are, they are quite visible. 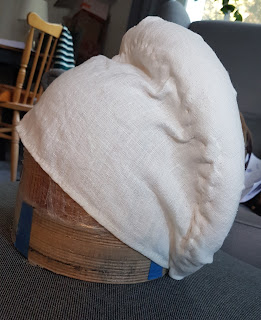 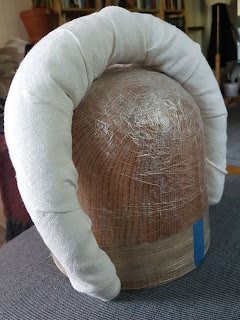 All of this took about 2,5 hours to make.
The strings are made by the same linen fabric as the rest of the haube. Cut a strip, 2 cm vide and 80 cm long. Fold it in from both sides. I used running stitch. Whip stitch works fine also. When done attach to bottom of wulst. 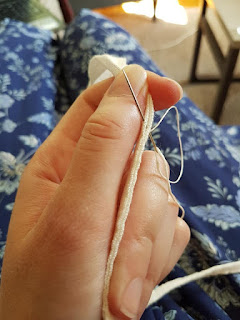 With the strings attached its done, and it took about two more hours, so four hours in total.
Because of the open frame the wulsthaube can be used by people with different headsize. The gap at the bottom of the head will just become different. But by securing the straps tight around the head the wulsthaube stays in place anyway. 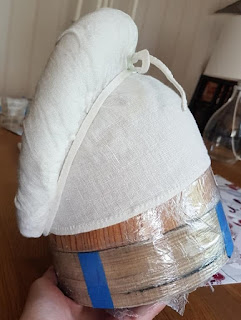 And it is off to one lucky new owner! Hopefully I can get a picture of her wearing it to publish here.
Source:
Marion McNealy making a wulsthaube - https://www.youtube.com/watch?v=k-3ck_9PXJA
Textilier Hausrat
Nets-Knots-Lace: Early 16th century headdresses from East Tyrol
Upplagd av Marlein - a 16th century wardrobe kl. 09:28