A lot of projects on my hands

I have been working with a lot of projects lately. There is so many fun things to do, to try. But the downside with having a lot of fun things to do is that nothing gets finished. And if nothing gets finished I have nothing to present to you. So, I though I was going to show you some of what I am working on right now. That will get a better presentation as soon as they are done.

Some of you have already seen my latest embroidery. I put it in the DW a & s - group on Facebook a while ago. Its a 16th century german blackwork embroidery. Black silk on linen. The pattern was publiched in patternbooks 1579, 1582, 1586, 1588, 1589, 1596, 1598, and 1600. But I also found a painting from 1560 that have an embroidery very similar to this one. The plan is to make a embroidered haube out of this. The small ones from the late 16th century period does not look that good on me. I need a bigger haube to get some kind of balance to my head, strangely enough. So it will be a bit anacronistic with the embroidery from 1560 and the size of a wulst from 1520. But I think it will look awesome.
I have made half of what I need, so I need to keep working on this one.

Some of you have also read the article I wrote about my new ärmelrock, the new gown that I am making. The skirt is already done. You can read about the skirt here. The bodice is almost done. I only need to adjust the front and fasten the hooks and eyes. And make sleeves. And attach the skirt to the bodies of course! And take som nice pictures of it... 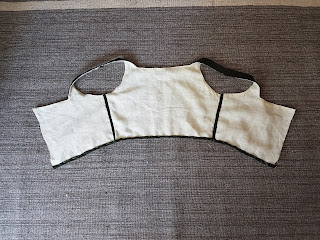 As a handicraft exchange I also making a pair of trousers for a friend. I usually dont make garments for men, except for the shirts. But its a good practice. And I want to learn. So, just do it, right?!
The pants I am making for him is going to be wide 16th century trousers seen in Paul Dolnsteins drawings. 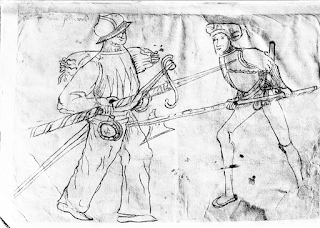 This drawing is from the battle of Älvsborg in Sweden 1502.
So far I have only been making a pattern but I will try my toile on him tonight and after that I can start sewing. They are going to be made out of red wool and with a linen lining.

Im sorry for the crappy picture of the pattern. To get an idea of how they could have been constructed I looked at patterns for folkcostums and landsknechtspants. But I wanted to make it without a codpiece, so I needed to go more towards folkcostum and less landsknecht.

I am also working on a new kirtle for me. Its red...like almost all my other dresses. I need a colourchange... The pattern is drafted using the bara system presented by The modern maker. Its is actually made in linen. I never thought that I was going to make a linen 16th century kirtle… Some of my inspirations comes from an extant italian dress, made of a wool/linen mix. But I didnt have a fabric like that, but I did have a linen fabric woven in the same method, so the choice was quite simple. It is going to be withouts sleeves and a bit shorter then I normaly make my dresses. I tend to make them to long. Instead of my usuall white linen thread I am using a red silk thread. 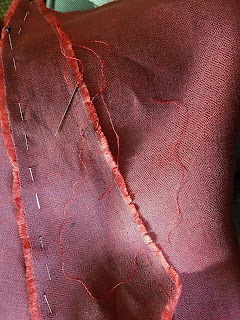 Its a good thing that this is my last day before vacation. So I will have a lot of time finishing stuff!