Haube with blackwork, needlelace and spangles.

The medieval tradition of covering the hair with a haube, a hood, as a sign of marital status continued during the 16th century. In the first years of the century the headwear was quite plain, mostly just white linen. But smaller embroidered ribbons with late gotic patterns started to appear and soon the embroidery on the haube could be quite large.
When I made my last embroidered haube, to be found here, I though it would take longer before I made another one. But this summer I spend a lot of time in my summerhouse and needed something small to bring with me, and that was an embroidery. So when the summer was over I had a finished piece of embroidery, fit for a haube. It was quite wide, and long, so, a haube or a brustfleck. And I dont have a suitable dress for a brustfleck yet, so therefore, haube! 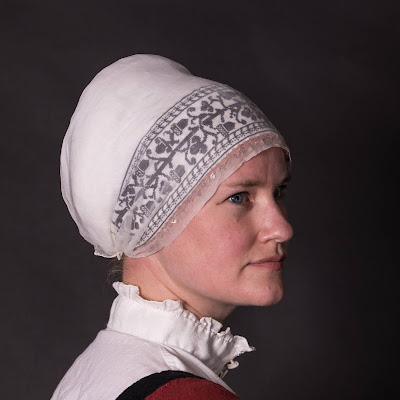 Its made with cross stitch in black silk on white linen. 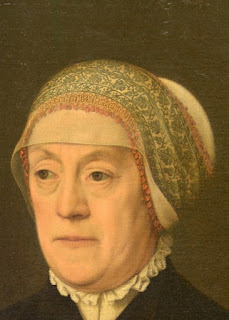 She wears a smaller wulst, the development of the headwear saw a reduction in size after the first decade of the 16th century. Later the wulst also started to lean a bit backwards, and this lady wears a haube that is an example of that. Mine is not that big, but a little bit to round to be 1560. Its more like 1510-20 in its form. On top of her wulsthaube she wears what I interpret as a haube, a cap, not a veil.
For the outerparts I made the pattern up myself. Hers are more of little bugs, mine are more like little trees. 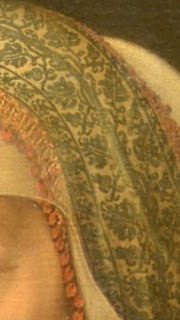 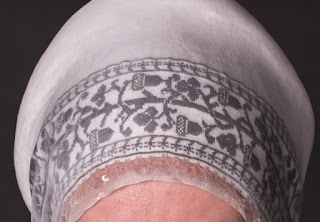 Geometrical patterns (late Gotic) was common during the first part of the 16th century to be replaced by softer more natural forms (early Renaissance). Flowers where common motifs. Mine is a typical early renaissance pattern.
This is when I was making the pleats in the back. They are secured with just one stitch in the back, attached to the straight back piece. Holes are then made in the sides to make a drawstring. And from the inside. 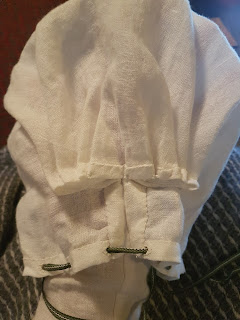 And just lying flat from the inside. 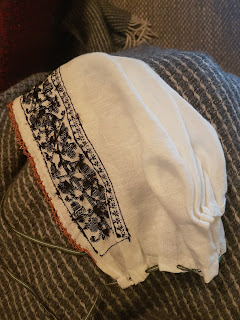 I also made the spangles myself. A friend of mine made me tools for spanglemaking earlier this year and this is the first time I have used them on a garment. They are punched out of a silver sheet. 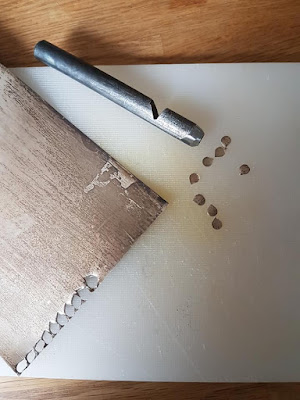 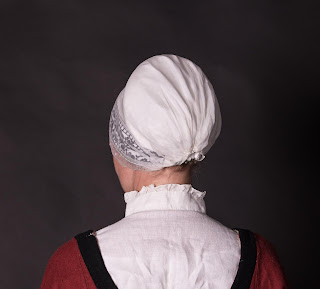 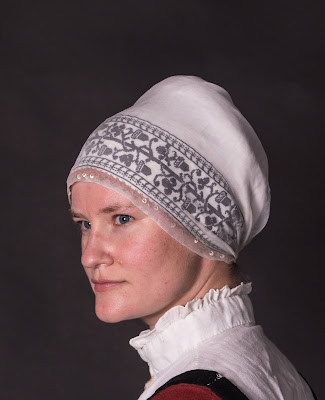 Without the covering silk gaze. 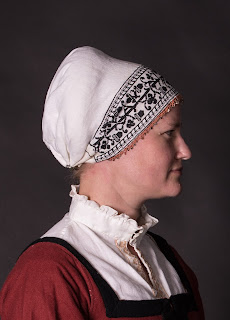 So, I made a haube, again, for a dress I dont have. Embroideries like these where not for everyone. Silk was a status symbol for the wealthiest people in society. The quality of the fabric was a indicator of the status of the wearer. It was forbidden by law to dress above your class. It was a narrow social class that could purchase and wear this exclusive commodity. Silk-, gold- and pearlwork were restricted to the upper-classes. And here I used both a lot of silk and also silver. 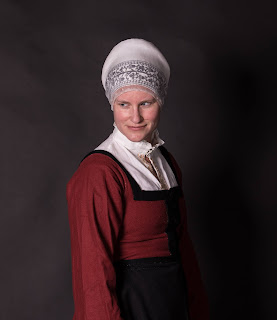