The recreation of an old garment

I haven't been writing that much lately. I do a lot of sprang, and there is a limit to how much sprang one could show in a row... But I have also started a class, a handsewing-class! Its at Sätergläntan, instituation of handicrafts. Its an amazing place, a place to be creative. Focus is on folk costumes from Sweden, which I´m not that familiar with. We have lessons at Sätergläntan a weekend a month and between weekends we have homework that has to be done before next time. As a homework this first month we are making undergarments. Last time we met we learned how to measure an old garment to make a copy of it. And now we are home making it, seeing how much we forgot to measure...

My garment is a shirt for a woman and its from 1860´s. I feel very familiar with it. It look a lot like the medieval garment I usually work with. It is just a little bit shorter and has a shorter sleeve. Its also made by more pieces than Im use too. It has a bodice with a skirt attached. 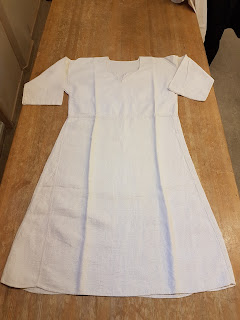 Here you see my pattern from measuring the garment. 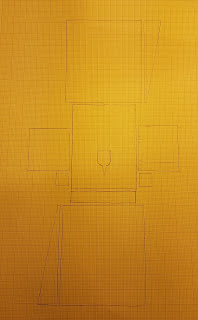 The piece at the front waist has no real meaning. Its might be a remnant from the developtment of the garment, when you used the width of the fabric for the bodice and the sleeves. Here is an undergarment made like that. The fabric is folded to cover the sleeves and the upperbodice. And the piece that is left under right arm is folded in at the waist and the one left under the left arm is cut of to be used for gussets. 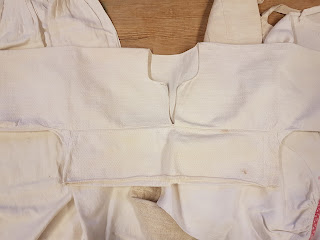 There is therefore no seam at the side under the left sleeve. 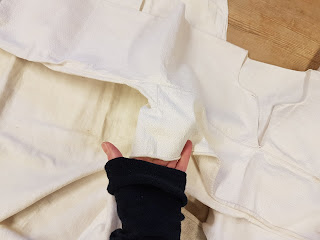 My garment had a seam at the side under the left sleeve so in this case its just a remnant. The two garments look otherwise the same, they are just made from different widht of fabric.
The shirt is made from a fabric with 10 threads/cm and the bodice with 20 threads/cm. The bodice is made to bee seen under a sleeveless dress and therefore made by a fabric that they probably bought. In this case cotton. The fabric in the skirt, that shouldnt be seen, are homemade. Its linen. When making mine I wanted to find fabric that had the same amount of threads/cm as the original. And I did. But my fabric for the skirt had a slight yellow colour. I wasn´t sure that I should use it untill I found this picture. Its a undergarment from the same period as the on Im recreating. Its made by bought cotton in the bodice and homemade linen in the skirt. And has different colours. The picture is from the book Dräkternas Hälsingland by Håkan Liby. 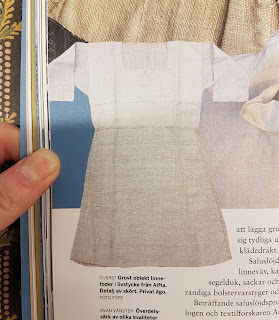 So I decided to use my white cotton and my yellow linen.
Here is my garment. 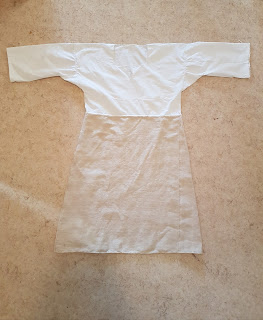 The biggest challenge for me was not the sewing. It was NOT doing as I am use to but rather to look at the garment and do the same. What does it actually look like, how is it done. To make the stitches bigger, to use a ticker thread than I usually use.
So the stitching might not look the same all over. I started sewing, seeing that the seam did not look like the old one and started to change the stitches to get the same look. I needed to use ticker thread than Im use to. And bigger stitches. That was a challenge...
I used waxed linen thread and backstitch all over. But when sewing the seam allowance I needed to make it a bit different from what I normally do. Usually I use whipstitch when sewing down seam allowances, and it was no difference. But the seam allowance was not fold the same way all over. It depended on if the were selvedge or not. When sewing down a seam allowance you can make the hemstitch single or dubble. Folded once or folded twice so that the edge is protected, inside the seam allowance. The single hemstitch on historical garments is use mostly when one or both is selvedges. I havent done that before and now I needed to on some of the seams. Its possible to use the single hemstitch with no selvedges also but then its good to put your stitches very close to the seam. In a way almost go around the seam allowance if you understand what I mean by that. In that way the thread is dragging the allowance, makes it a bulky, and the edge is a bit protected here as well. When using the double hemstich you can chose if you want to use whip stitch or back stitch. But when using the single hemstitch you need to use whip stitch.
The hem is folded twich and whip stitches, called a hemstitch. On older garment the stitches is visible on both sides, not as small as I want to make them. The stitches is leaning slightly. 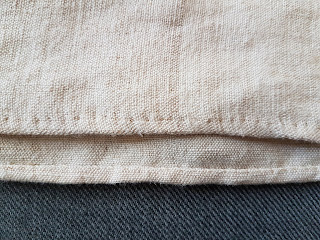 The seam allowance is also much smaller on this garment that Im use to. Maybe not the hem, but the rest... 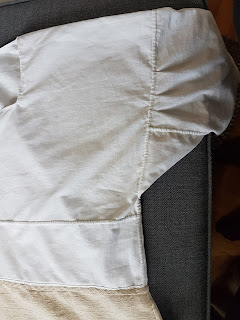 Here you see the waist and right sleeve.
And the seam between the bodice and the skirt. Its whip stitches. 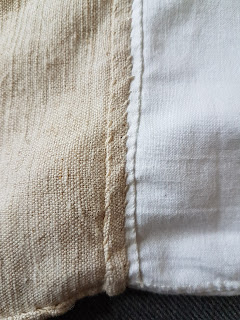 And the back. It was a selvedge at the bodice so no need for a hemstitch. 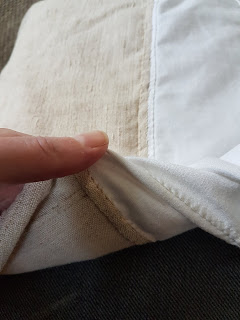 The skirt has two gores. I made mine from a squared piece of linen but after I started sewing I realised that the gores could have come from the piece for the front and back panel of the skirt. The waist is 51 cm. The hem is 76 cm. The gores is 2 cm at the waist and 14 at the hem. So there I waisted a lot of fabric that they wouldnt have. 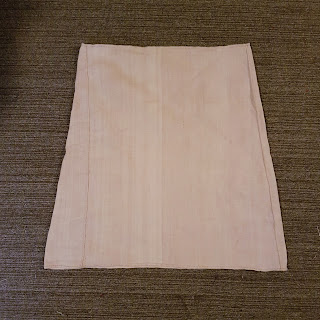 The neckband is folded out creating a small dekorativ border. This is the original. 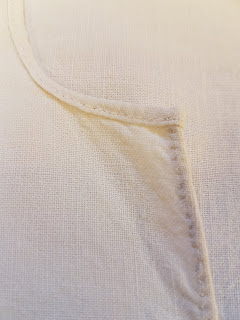 And this is mine. Its sewn with backstitch. 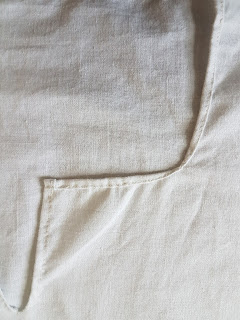 Around the edges of the sleeve there is a needle lace. This is the original. 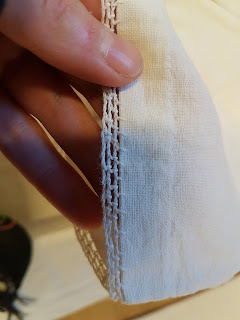 And this is mine
I think I got the pattern right but mine does not look exactly the same. I might made mine to big. But I like it so I keep it. Its made with linen thread, maybe I should try with cotton instead. For now I keep this one. 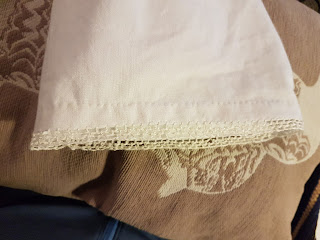 The fold at the hem at the sleeveend is quite big. Bigger than I usually do. But I made it the way it was on the original. The skirt is also a bit short. It ends at the knee. It should be a 10-15 cm longer to fit me properly.
Imagine to be able to do this on a garment from the 1600th century! I dont think that would ever happen so I need to be happy about the possibility to look at 19th century garments. Maybe I will end up with a hole outfit from 1860´s when Im done...
During the time it took me to write this they contacted me from Sätergläntan. And due to Corona they wont be able to see us next month. We will instead has our next class in january. So, I might have that whole outfit by then!
Upplagd av Marlein - a 16th century wardrobe kl. 00:21