During a restoration of the Lengberg castle (East Tyrol, Austria) in 2008 a filled vault was detected below the floorboards. More than 2,700 textile fragment were found in there. This part of the Lengberg castle was probably finished by 1485 so the finds is most likely predating this. Among the finds there were a couple of sprang woven fragments, in different conditions.

One of these pieces was a narrow sprang piece. Its worked with 32 threads and 16 loops. The average thread diameter is 0,6 mm and its a linen s-plied 2-ply thread. The lenght of the preserved piece is 15 cm.

Pictures of the original sprang can be found in the article Enigmatic Beauty The decorative headwear of Lengberg castle, by Beatrix Nutz, Rachel Case and Carol James. Page 11.

When making my copy of the sprang I used a linen thread, a 1 mm 4-ply thread. Its 0,4 mm bigger than the original and the finished piece is 2,5 cm wide and 23 cm long. A bit bigger than the extant piece. 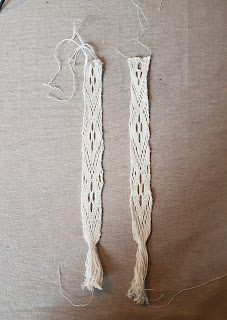 The left one in the picture was on top in the frame and therefore there are more thread in the upper part, its where the threads are fastneded after warping. I have a thread through the loops on top/bottom but its not really needed. The sprang does not unravel if this thread is taken out, its just easier to handle like this. 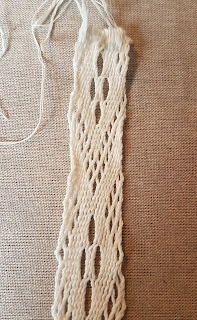 The pattern is made by Carol James and can also be found in the article. I dont have a printer so I painted mine from the computer screen. 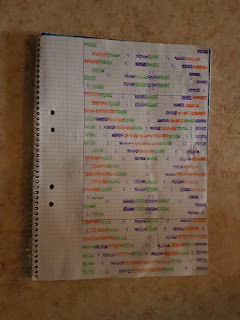 The pattern consist of the right-edge stitch, the left-edge stitch and a double stitch. One box in the pattern if one thread in the warp. The pattern is a bit different than what I have worked with before just beacuse parts of it are made in plait rows. Its the double holes in the middle of the pattern, seen in this pattern as green/blue/green/blue. The numbers are the amount of threads that are going to be twisted before there is a new stitch. The right-edge stitch and left-edge stitch consists of tree threads each and the double stitch is two threads up/two theads down. 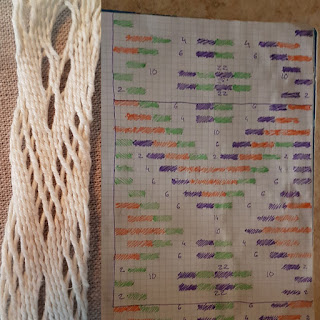 Its a quite small piece of sprang. It can be used as a decoration attached on top of a fabric or on a headwear, like a Birgitta-cap, or something similar. Its a bit to short so I actually started a new warp right away. Maybe I make a childrens cap out of this too.