Landsknecht and trossfrau on the march

In the armies of 16th century Germany there where a lot of women and children. Often more than there where soldiers. Camp women belonged to the army and took part of its military functions, even though they did not fight. Woman had a supportive role, they did the cooking, they set up camp, they mend and wash clothing and so on... 16th century woodcuts often display landsknechts accompanied by their women. The pictures often shows a lot of emotion between the two, sometimes holding hands, sometimes a hand on a shoulder or leaning against each other. When a landsknecht army was on the march there was a lot of wagons, a lot of people walking, and a lot of people riding horses, not uncommon with two people together on a horse. She is riding in the back, sitting sideways, often with a lot of stuff with her. He is in the front, with a sword. 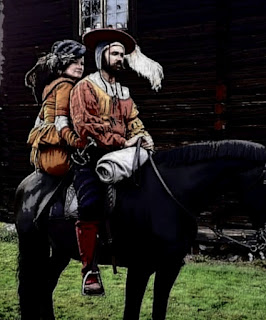 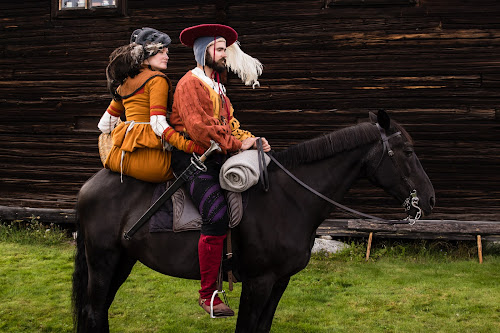 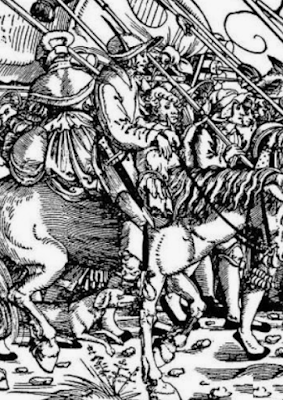 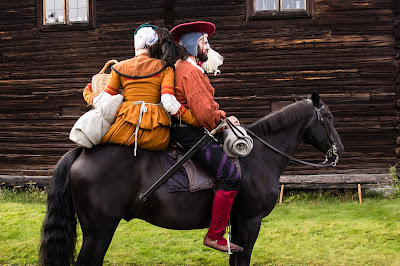 Im wearing my gown, a rock in German, in orange and red wool, a gollar in wool, wool socks, a linen smocked apron and a simple stuchlein and a hat with feathers. I also have handmade leather shoes. All the items are handmade by the way, not only the shoes. A friend of mine made the shoes, I made the rest. My skirt is tucked in around my belt, in a typical manner for the camp women, so that I could move more freely.

This dress is made with a certain woodcut print in mind, Triumph of Maximilian. I tried to make it as the dress in the woodcut, but I added the red guards, just because I though it looked good. And I changed the colour, from pink to orange. Orange/yellow was one of the easiest colours to dye and I therefore thought it suitable for a camp woman´s dress. 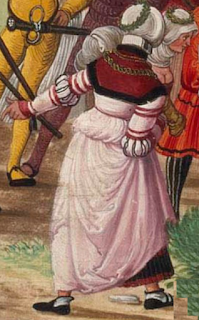 It was the women's task to carry things, to organize, to set up camp. So I needed to bring as much stuff as I could up on the horse. A cushion from my sofa wrapped in linen-fabric, a blanket and a basket was used as props. The basket is a model that has occurred in woodcuts, but I cant find any right now. 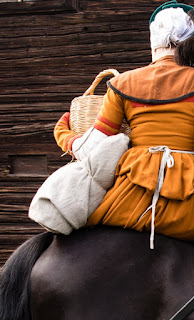 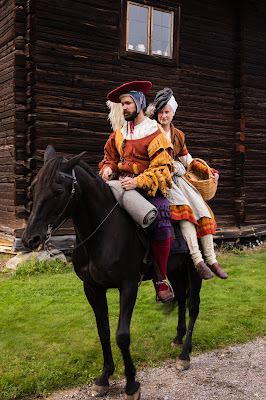 My friend H is wearing a smocked shirt, made by me. A red and yellow doublet, with holes for attaching the hose along the waistline, a slashed hose in black and purple and red wool socks.He also has a coif and a red wool hat with a ostrich feather. Of course he also has a sword. And the typical oxmule shoe. 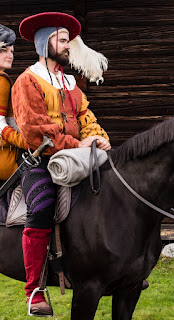 The photos are taken by Anders Ragnarsson. 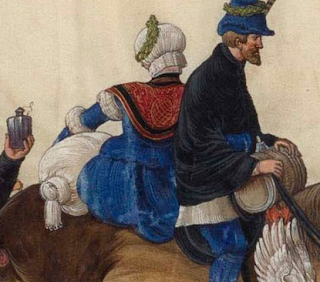